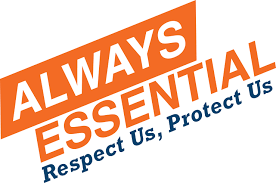 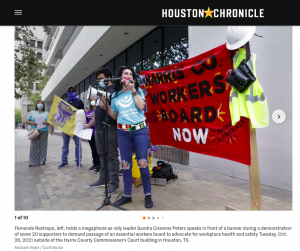 ‘Striketober’ may have ended, but for many, it’s only the beginning. Whether it was John Deere, Kellogg’s, Warrior Met Coal Inc., or Kaiser Permanente, tens of thousands of essential workers throughout October either went on strike or authorized strikes across America to demand pay raises, benefits, and safer working conditions. But, Why Now?

“It might be too simplistic of an answer, but it’s the pandemic,” stated Nafisah Ula, Organizing Director of Jobs With Justice National during a podcast interview. “We’ve said time again that the pandemic laid bare all the systemic problems within our economy. From long hours and increased health risks for essential workers to skyrocketing corporate profits (at companies like Amazon and elsewhere) and astronomical CEO compensation. Striketober has been a long time coming. Workers are finally actualizing their power.”

Below is a rundown of the latest efforts by essential workers to fight for improved health and safety standards, better pay, and working conditions. 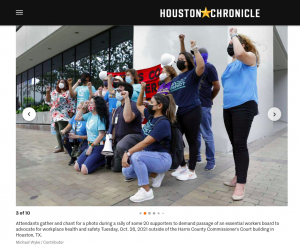 “We certainly welcome parts of this mandate and agree that vaccinations are critical to protecting essential workers from COVID-19. Of critical importance are its provisions for paid time off to receive the vaccine and recover from side effects and requiring employers to provide accessible information to employees about the vaccines.

“However, we are concerned the rule as written does not mandate that companies pay for testing or PPE, such as masks. Furthermore, it does not require employers to provide paid sick leave if a worker tests positive for COVID.”

“Throughout the pandemic, essential workers put their health and safety on the line to fuel our economy and keep our communities safe and fed. Many of their employers were making record profits while essential workers got sick and died.

“We demand employers be required to cover the costs of masks, testing, and (paid) time-off for any essential workers testing positive for COVID-19.

“COVID-19 has repeatedly laid bare the breadth of protections that the most vulnerable essential workers lack. It’s long past time for employers and the government to use every tool available to prioritize the mental and physical health of essential workers.”

A new survey commissioned by the AFL-CIO labor federation found that 74% of respondents said workers were right to walk out for better pay and benefits. Only 20% strongly disapproved or somewhat disapproved of them. “Voters of all ages, backgrounds, and political parties agree: working people can and should join together to win a better deal and a better life,” said AFL-CIO President Liz Shuler. “Every union member on a picket line today is stronger knowing the American people have their back.” Ethan Winter, senior analyst at Data for Progress, said the survey results on strikes seemed to dovetail with Gallup’s polling on union favorability, which this year hit its highest level since 1965. As people warm to unions and collective bargaining, it is no surprise they support striking workers, he said.

The same voters that Democrats have been struggling to win over and energize in recent elections — low-income and non-college-educated Americans — are among the strongest supporters of unions and the current wave of labor strikes, according to a new poll from More Perfect Union and Blue Rose Research. Overall a majority of Americans agreed that the current strike wave is long overdue and more union employees are needed — a significant show of support for President Biden’s efforts to grow labor unions’ ranks. The poll findings also indicate that taking action to support workers who want to unionize or who are on strike could help to woo non-college voters back into the Democratic Party as well as reinforce the Democratic Party’s base of support among young people and people of color, groups which our poll finds to be the strongest supporters of unions and strikes. Fifty-two percent of Americans making less than $25k a year said they would support a strike at their job, as did 54 percent of people making $25k-50k.

On November 2nd, Justice for Migrant Women (J4MW) organized #DiaDeMuertosaltars across the country to #HonorEssentialWorkers. The altars honored and remembered the workers who died while keeping our communities afloat during the global pandemic through their critical work. Justice for Migrant Women, partners, and community members also continued to call for accountability from political leaders that too often failed to enact meaningful protections for essential workers. “Throughout the fear and uncertainty of this pandemic, essential and frontline workers have continued to show up, even when political and business leaders did not show up for them,” said Mónica Ramirez, Founder and President of Justice for Migrant Women. “These altars are both an opportunity to remember those who have died, and to commit to taking action in their memory for those who are still living. We owe them a debt of gratitude and to fight for the change so that no more workers will die because they were not adequately protected.” 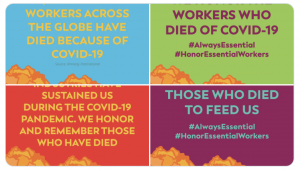 Also, noteworthy on Día de Los Muertos was that the Congressional Hispanic Caucus (CHC) honored essential and frontline workers who passed away during the COVID-19 pandemic. 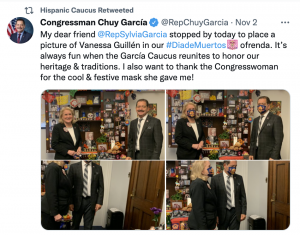 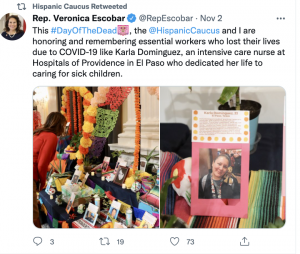 After extraordinary pandemic hardships, hospitality workers in 29 cities across U.S. and Canada declared that it’s time to “Come Back Stronger” with a variety of events on October 28th. “Workers are fed up with bad jobs and unsafe working conditions, and now they’re seizing the moment to come back stronger in an economy that has favored too few for too long,” says D. Taylor, International President of UNITE HERE. “For HelloFresh, the pandemic was a business opportunity, but for us workers, it’s been a nightmare,” said Yesenia Bustos, who works in shipping and receiving at HelloFresh in Aurora, CO. “I’m voting for the union because we’re under so much pressure to make the meal kits, workers are constantly being injured in our kitchen, and my wages aren’t enough to support my family. These are the jobs that have been created by COVID, and they should be good jobs.”

On November 1st, the New York Times reported on “how the pandemic has added to labor unrest. “While big companies wield considerable power, Covid’s economic disruption has given workers new leverage, contributing to a recent upturn in strikes.” “We were essential,” said Leslie Glazar, recording secretary of the local union representing spirits workers. “They kept preaching, ‘You get us through that, we’ll make it worth your time.’ But we went from heroes to zero.” Many workers also contend that their employers have failed to share enormous pandemic-era profits, even as they sometimes risked their lives to make those earnings possible.

After working four years without a contract, 800 teachers and paraprofessionals in the Scranton Federation of Teachers are preparing to strike. The strike comes after more than four years of teachers working on an expired contract, and more than five years without a pay increase. Tensions reached a boiling point this week over what the Scranton Federation of Teachers feels is inadequate health care coverage in the board’s proposed plan. “We’ve reached the end of the line and our patience with the Scranton School District. The district has refused to address our concerns about the slash-and-burn budget cuts that are significantly affecting the quality of education.

Strikes are always the last resort. We held off for many months, hoping, in vain, we could agree on conditions that are good for kids and provide decency, fairness, respect, and trust for our educators,” Federation president Rosemary Boland said in a release.

A group of 28 labor and workers’ rights organizations from New York state areurging Senate Majority Leader Chuck Schumer (D-NY) to bring to a vote the Pregnant Workers Fairness Act. “Protecting pregnant workers is a matter of great urgency, especially during the pandemic,” the organizations write, “and they cannot wait a day longer for this bill to pass. Now is the time to act. The right to receive reasonable accommodations absent undue hardship on an employer should not depend on luck or location.”